Sheikh Mohammed Bin Rashid Al Maktoum’s Godolphin continued its dominance of the Keeneland September Yearling Sale during Tuesday’s second session by purchasing the day’s two highest-priced yearlings, headlined by the $4.1 million Curlin colt out of New Zealand champion sprinter Bounding (AUS), who is the most expensive September Sale yearling since 2010. Godolphin also took home a War Front colt out of Kentucky Oaks (G1) winner Believe You Can for $2.9 million.

Through the first two sessions of the September Sale, Godolphin has acquired six yearlings for $13,250,000, among them the four highest-priced yearlings so far in the sale. They include Monday’s session-topper, a $2.5 million Tapit colt who is a half-brother to champion and Kentucky Derby (G1) winner Nyquist and a Medaglia d’Oro colt out of Grade 1 winner Tara’s Tango for $2.15 million.

“The love of horse racing and the hope of finding a champion,” Stroud said. “He loves this sport, he loves coming to America and he loves Keeneland – all those things. That’s why he’s doing what he’s doing.”

Godolphin outbid Irish-based Coolmore to acquire the top seller, the most expensive yearling sold at public auction anywhere in the world in 2019.

“It makes me feel better, because they’re so talented at what they do,” Stroud said about Coolmore. “I think it’s a huge compliment that they liked the horse because they’re a great group of people and they buy wonderful horses.” 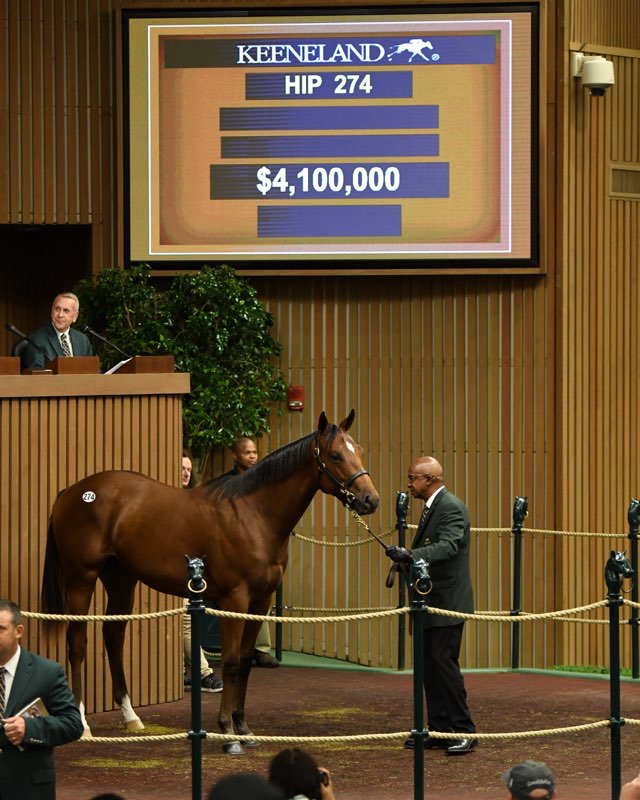 On Tuesday, five yearlings brought $1 million and more to increase the total number of seven-figure horses sold during the first two sessions to 12.

“What an incredible day,” Keeneland Vice President of Racing and Sales Bob Elliston said. “Today the average horse sold for $451,000 and the median jumped $50,000 more from yesterday – that’s just staggering. It wasn’t just the $4.1 million colt or the $2.9 million colt. There was depth to the market; the increase in the median shows you it wasn’t two horses that caused those numbers to jump. There was incredible trade throughout the course of the day, a lot of people struggling to get horses bought. People whose names we see every day on the summaries. I talked to one who is a consistently top five buyer – he’s bought two so far and has been the underbidder on about 10.

“I’m hoping they don’t get frustrated; I know they’re going to find quality. It continues tomorrow in our third session of Book 1 and beyond through Books 2 and 3. I fully expect these people are going to fill their orders, and that’s exciting for us.”

The session-topping $4.1 million Curlin colt is the first foal out of 2014 champion New Zealand sprinter Bounding, by Lonhro (AUS). He is the September Sale’s most expensive horse since Besilu Stables went to $4.2 million to acquire Mr. Besilu in 2010.

“A lovely well-balanced horse from a good farm; we liked him very much,” Stroud said. “He was just a wonderful mover and had athleticism.”

The colt was consigned by Eaton Sales, agent for Stonestreet Bred & Raised. Stonestreet bought Bounding for more than $1.3 million at the 2016 Magic Millions Gold Coast National Broodmare Sale in Australia.

“I’ve been trying to raise an internationally acclaimed (racehorse by) Curlin,” Banke said about the 2007-2008 Horse of the Year who raced for Stonestreet and Banke’s late husband, Jess Jackson. “It’s one of my goals in life. This horse has every license to do that. I think Curlin deserves to be recognized in Europe as well as here.

The $2.9 million son of War Front is the third foal out of millionaire Believe You Can, a daughter of Proud Citizen who was bred and raced by former Kentucky Gov. Brereton C. Jones. He consigned the colt, a half-brother to stakes winner Believe in Royalty, in the name of his family’s Airdrie Stud, agent.

“You never expect (this price), but we brought him up here thinking we had a chance to have a really special Tuesday and we’re fortunate everything worked out,” Jones’ son, Bret, said. “This horse handled it like the special horse that he is. Everything about him says ‘racehorse.’ I hope he’s even better on the track than he was in the sales ring.”

Bret Jones said today’s sale marked another rewarding day for the Jones family thanks to Believe You Can.

“That first Friday in May of 2012 when we had the whole family there and (Believe You Can) wins the Kentucky Oaks,” he said. “You have those memories, and now years later we’re making new memories with family members that weren’t even here back then. So it’s very special. When you have a family farm (like Airdrie), it’s just very special to be able to share it with the people that you love.”

“Sheikh Mohammed really liked this horse,” Stroud said. “It was a great deal of money. He is obviously by a great stallion and from a Grade 1 mare. He is bred right by a fantastic stud farm, and he has the conformation to suit. We thought he was a really, really good horse.

“(Other bidders) pushed us all the way,” Stroud said. “Hopefully, he will prove well worth it, but (the price) was more than we anticipated. (The price) shows the market is buoyant at the top. There is a demand for good horses.”

The daughter of Curlin, who is out Grade 1 winner Dreaming of Julia, was consigned by Denali Stud, agent for Stonestreet Bred & Raised.

The daughter of War Front is the first foal out of the Grade 3-winning Tapit mare Delightful Joy. She was consigned by Gainesway, agent.

Godolphin struck early Tuesday by going to $1 million to purchase a Union Rags filly who was the sixth horse in the ring. She is a half-sister to 2019 Black-Eyed Susan (G2) winner and Grade 1 runner-up Point of Honor and to Wicked Whisper, a recent juvenile winner at Saratoga in her career debut.

Taylor Made Sales Agency, agent for Siena Farm, consigned the filly, whose dam is the Bernardini mare Zayanna. She also is the dam of stakes winner Velvet Mood.

“She has been bought for America, to race here,” Stroud said. “Sheikh Mohammed wants to buy some fillies to race in America. She fits the bill: well bred, very athletic and a nice filly. We’re very pleased. (Her active family) helped. She is a good easy mover with a good pedigree coming from a good farm.”

The September Sale continues through Sunday, Sept. 22, with the third and final Book 1 session starting tomorrow at noon ET.